The film blog went thataway: Cinefille- where my reviews, interviews and general film thoughts are going.

After a loooong visit chez Facebook - which is a nice place but no place for some of my comments about various things going on. FB shall be reserved for shout-outs, event planning, whining (qui, moi?) about aspects of my current job and setting up collaborations.

So, back to my various obsessions about politics, art, general rants and social commentary.
It's a new year.

On which I learned WAAAAAAY too much about various people...

It's also great for social networking and getting hooked up with other writers, artists, socially interesting people (don't hate me, MySpace.....!) and do MASSSIVE inviting at once....

But.
Still...
Got stuff to say,
revolutions to foment,
hellraising to do.

meanwhile:
check out my screening series Movies that Matter on facebook and at moviesthatmatter.blogspot.com

How's that for self-serving promo?

I thought I would provide a partial list of endorsement for the fistful of people who read this blog (an easy excuse to put up a post, anyway :)). These endorsements are both national and state- for the California vote.

Proposition 8- the wording on the ballot states:

ELIMINATES RIGHT OF SAME-SEX COUPLES TO MARRY. INITIATIVE CONSTITUTIONAL AMENDMENT. Changes the California Constitution to eliminate the right of same-sex couples to marry in California. Provides that only marriage between a man and a woman is valid or recognized in California. Fiscal Impact: Over next few years, potential revenue loss, mainly sales taxes, totaling in the several tens of millions of dollars, to state and local governments. In the long run, likely little fiscal impact on state and local governments.[26]

NO on Proposition 4 (because of issues regarding abusive guardians and the conditions under which the minor may have become pregnant.)

Whatever your position is, get out there and do this:

On
November 4
and remember:
if the voting machines fail,
you have the LEGAL right to a printed ballot
and a private voting booth.
Demand this
and
make your vote
count.

Courtesy of Sepia Mutiny comes this nasty piece of work out of Sacramento County- the work of some brilliant mind at the county GOP who seems to be blissfully oblivious to the realities of multi-cultural, multi-ethnic life here in the US, and in particular in Sacramento County which has a very diverse population. 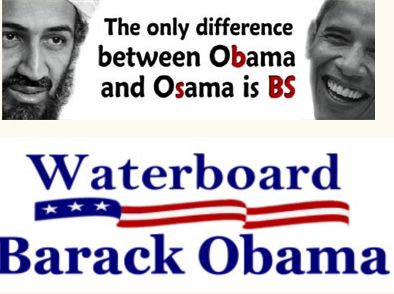 This is disgusting, regardless of which party does it. There are so many things wrong with this, tha I can't even begin to go into them, but for starters, the Obama is a Muslim and Muslim are baaaaaaad people, man, is a tired, divisive refrain which is, theoretically, contrary to the concept of the US as land of the free, home to a mutual plurality. And then there is waterboarding, aka, torture. Think about that for awhile.

If you would like to drop in on the Sacto Country GOP, here is their url:
http://www.sacrepublicans.org/

They have since taken this material down, but there seems to be a range of reactions from oh well, to god this is awful,
# posted by zazou @ 11:43 am 0 comments

Once again, George Bush and co strike a blow for...reactionaryville and Reagan's America in which good little girls dream of white picket fences, nice little jobs until the man they love comes along, sweeps them off their feet and into lovely Lilli Pulitzer dresses with strategically placed bows for the mom-to-be, for which they have paid by sweetly asking if they could use the credit card because, of course, they don't have any money of their own because no businessman in his right mind is going to hire that sweet little lady because she's going to be a mommy soon and well, new mommies should stay home with their new babies and make sure the new daddy has a nice drink and a clean baby to admire when he gets home after a tough day working for his sweet little family.

And of course there's the bad girl, out there drinking mojitos, working (maybe even working in management) getting laid, and slowly but surely making her way toward that hanger in a back alley with her name on it.

Then there's the rest of us, back in realityville, who want to beat George Bush over the head with a trojan (the horse, not the condom unless you can fill it with something really heavy).

In case you've been too busy watching Gossip Girl (I think the girls on that show use contraceptives...), you've probably heard by now that Bush co would like us to believe that contraceptives= abortion. Unless Bush is doing a Tony Blair and becoming a post-Vatican/pre Jean Paul II Catholic for whom the Pill and abortion is a confused, somewhat gray area, Bush is.Full.Of. Shit.

For anyone who wants to argue that no Habeus Corpus required at Guantanamo Bay won't affect us, I say Horseshit.

Here is a clear-cut example of US foreign policy in regards to abortion and contraception being brought home to be tailored to the Religious Right's agenda for the American people.

Access to abortion is currently at its lowest since shortly before Roe v. Wade. All this abstinence teaching isn't working (ask John Edwards, for example) be it for straight or Gay sex while the US remains a highly sexualized society.

Sex between consenting adults is a private thing. and as long as no one is getting hurt, forced against their will or part of an arrangement that includes cheating on a spouse/serious partner, whatever.

However, what, exactly does Bush Co suggest replace contraceptives? The rhythm method? Oh, puhleaze! Condoms? hey, anyone out there volunteering to be the posterboy of condom use?
No?
Oh.

Most women have at least one partner is their history who was not a condom enthusiast no matter what she said or did.

case in point- the ex who said and I quote- I did not get married so that I could use a condom...
(To which I thought great- have some chemicals and see how you like it! To his credit, he did look very concerned when I read him the issues surrounding the birth control pill- we were very happy when the ortho shot showed up and the sponge came back).

So why is it that men, who don't have to take hormone-adjusting cocktails or stick things up themselves (then again, that could be arranged...the sticking something up you know where part), think that adjudicating a woman's right to choose is their perogative? Men who don't have to carry a baby nine months, spend a lot of time in the bathroom puking their guts out (must be that frat nostalgia thing going around), risking various things, not to mention breastfeeding etc, are presuming to think that they know what is best for women.

That sucking sound you hear is US society rushing backwards into the lovely era of white picket fences, moms with no credit unless dads extend it, glass ceilings miles thick- and oh yeah, in case you all forgot, miscegenation laws and Jim Crow. The backward move into the Great White Man in the White House knows best about the female body is part and parcel of a movement that restricts civil rights, creative thought, constitutional freedoms in the name of patriotism and decency- thinly veiled versions of a Religious Right agenda.

While Condy may tell Russia hands off Georgia, she better damn well be thinking of telling Bush Co hands off the American female body as well, because if she doesn't, a whole lot of us will.

deeply, deeply ashamed by this and disgusted.

In a country known for its more humane view of life and living, this is despicable. However, it also shows how far Italy is veering toward the right with the influx of immigration(ironic from a country from which so many people immigrated,including the infamous Mafia and La Cosa Nostra- two groups not famous for law-abiding behavior).

ON a beach near Naples, two young Roma (Gypsy) girls, both born in Italy (and therefore Italian citizens) lie covered with towels, not because they are sunbathing, but because they have drowned in sea, right off the beach.

For several hours, as their bodies lay on the beach awaiting an ambulance, Italian beach goers picnicked nearby, and continued to enjoy the beach.

The relationship between Italians and have been fraught with tension of late, especially with the influx of Roma from the Balkans. There are severe problems with integration and aculturation even though the Roma have been living in Italy for almost 1,000 years.

Whatever the rubs, however, two little girls lay dead on a public beach, and in the words of James Baldwin as he spoke about the four little girls killed in an explosion of a church on a Sunday in the South during the Civil Rights Movement years, "nobody cared."

How sad for these children, how absolutely tragic for the rest of us.

Friday, August 15, 2008 
Catching up. Ok, I confess, my viewing of the Olympics has been less than stellar. I am not glued to the TV, I don't watch it much, if the games come up while channel surfing, I'll watch. And here's a little secret- the TV isn't on that much. Whew, feels good to get that out in the open.

Yeah, well.
Here is an Olympic tidbit that managed to catch up with me, which could be called:

What Were They Thinking?
Oh, yeah, right, they're from Spain.
I'm sorry, love Spain, love my Spanish friends, but as sportsmen, their sports teams are a national shame.

The latest lovely demonstration of Spanish manners was held by not one by several Spanish Olympic teams, including the Women's basketball team.

I don't care if this was for an ad, it's racist, demeaning and disturbing, especially given the racist behavior that occurred during the World Cup in 2004 with several people appearing in blackface to racially jeer Hamilton, a Black British player.

This is just unacceptable no matter who does it.

For a take on how this kind of thing makes people feel, lend an ear to this from NPR:

Midnight's Children are collectively 61 today. Things economically are looking quite good for India as it sits, poised to be a major player over the next 10 years.

Currently at large in Southern California